They like their 3-2 matches do the OECS (Organisation of Eastern Caribbean States) team – having come from behind in both their pool matches, they did it again in the final to claim the title for a first time (well, at least since 1977), going one better than last year’s second spot.

Barbados Ladies once again proved too good for the rest in a women’s team tournament which featured just three entries.

Barbados knew that the overall team title (based on a points system over Men’s, Women’s and Vets teams) could be theirs, but their first priority was to maintain their unbeaten record in the final pool match against Cayman to avoid any possibility of a complicated countback with themselves, Cayman and Jamaica.

Many-time Cayman champion John MaCrury got the hosts off to a good start, coming from 2-1 down to beat Nigel Griffith and claim the Men’s 50+ title in the process. After that though it was all Barbados as they reeled off the next four matches to take the Vets, and the Overall titles. In the process Mark Sealy and Kristina Evelyn maintained their unbeaten records to take the Men’s and Women’s 40+ titles. That rendered Jamaica’s win over T&T irrelevant in terms of team titles – they finished second in the Vets and the Overall, as well as in the Men’s – but it did mean that Douglas Beckford and Gill Binnie took the Men’s Over-60 and Women’s Over-50 titles.

Results can be found here. 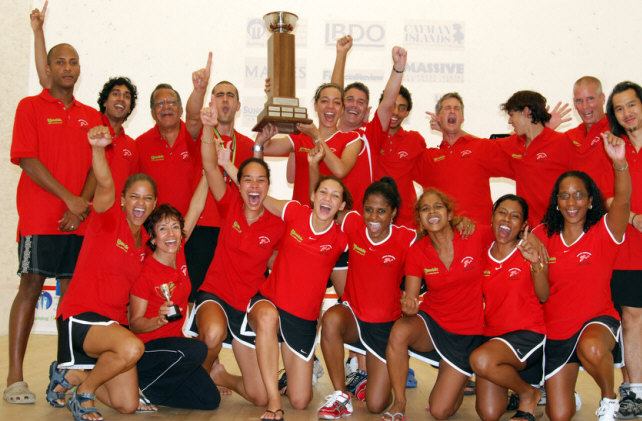 What a day … pretty much every match went down to the wire,
throwing the schedule into chaos. At the end of the day – the
very end, five minutes to midnight – Trinidad and Tobago
completed a remarkable treble.

The news just got better and better as the night went on … not
only did they claim their first ever CASA title, they made it a
hat-trick as they took the Men’s Team, the Women’s Team, and the
all-important Overall title to boot.

The 22nd annual Caribbean Area Squash Association (CASA) Junior Caribbean Squash Championships concluded this evening (Friday) in the Cayman Islands with Jamaica winning the boy’s team title 3-1 in the finals against Barbados, while in the girl’s team final Barbados won its twelfth girl’s team title by overcoming a plucky Trinidad and Tobago team by three matches to two. At the time of writing the third place finishers were not known but by virtue of its 1st and 2nd place finishes Barbados claimed the overall team title for the fourth time in six years with 18 out of a maximum 20 points. Jamaica placed second overall.

After Barbados eased into the girl’s final with a 3-2 victory over Jamaica in the first semi-final on Thursday, Trinidad and Tobago followed suit with a similar victory over the defending champions Guyana in the other semi-final. The Barbados team would have started the girl’s team final full of confidence since they defeated T&T by four matches to one when they met in an earlier round robin encounter. First on court for Barbados was the Bajan star of the tournament, Cheri-Ann Parris, who earlier in the week had played unbeaten in her age group in the individuals to become the new Caribbean under-15 champion. Cheri-Ann had also won all four of her previous team matches and wasted no time with Trinidad’s Tessa Martin and won in straight games 3-0. After the next two matches in the under-19 age group were split with 14-year old Bo Harris of Barbados winning at #1 and Maia Blackman losing at #2 to Jamie Galt and Nakita Poon Kong respectively, the Barbadian under-13 champion, Tanya Marshall, sealed victory for Barbados with a confident 3-1 victory over Trinidad’s E. Bones.

In the final dead rubber, Barbadian Nadia McCarthy was forced to concede her match against Trinidadian, Joanna Scoon, the new Caribbean under-17 champion due to illness, but this did not affect the overall result with Barbados reclaiming the girl’s team title that they have held more often than all the other Caribbean teams combined since these junior championships began in 1981.

In the boy’s team finals the confident Jamaica team swept the first three matches against Barbados making the final two matches merely academic. At under-15 the Jamaican, B. Burrowes defeated Nkosi Ross, while at under-19 #1 David Patterson defeated Rhett Cumberbatch and at under-19 #2 Brad Lowe defeated Alex Garcia to clinch Jamaica’s first boy’s team title since 1983. In the final two dead rubbers, Barbados’ under-13 Liu Ross defeated S. Reynolds of Jamaica while the final under-17 match between arch rivals Bryant Cumberbatch of Barbados and the new Caribbean under-17 champion, Chris Binnie of Jamaica, was not completed due to time constraints.